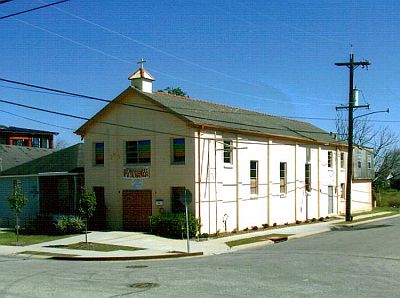 Carver Baptist Church #2 was organized on December 9, 1951 in the home of Reverend R.S. Neal and his wife, Ollie Neal at 3020 Metropolitan Street, New Orleans, Louisiana.  On January 20, 1952, the church purchased a lot at the present site, 3301 Montegut Street, for the sum of one thousand dollars ($1,000.00). Under the leadership of Reverend Neal the church began a building program and the congregation grew to 98 members. Reverend Neal served as pastor until March 15, 1953.

Upon the departure of Reverend Neal, Brother Samuel Thomas led the Christian body. Church services were then held in a house located on Humanity Street, directly behind the present church. The house was purchased for the sum three hundred dollars ($300.00).

In April 1953, Carver #2 became a member of the Southern District Baptist Association. Reverend James Wynn, president of the Southern District, headed the church’s search for a new minister. On April 8, 1953, Reverend Hosea Rivers was recommended and chosen by the members of Carver #2 Baptist Church as their new Pastor. Under the leadership of Reverend Rivers, the church received its charter (1953), and a new church building was constructed on the lot located 3301 Montegut Street.

Reverend Rivers served as pastor until May 1958.

On May 21, 1958, Reverend Morris A. Edwards Jr., began his leadership at Carver #2 Baptist Church.  With him on this day, came seventy-five (75) members with Christian experience from the Desire Street Mission; all of whom were accepted as full-fledged members of Carver Baptist Church #2.  At this time, the Pastor, officers, and members also agreed to change the church’s name to CARVER-DESIRE BAPTIST CHURCH.

Under the leadership of Reverend Edwards, the church and community underwent dramatic change. At his instigation, a city dump, located directly across the street from the church, was cleaned up and removed; streets were paved, and a new townhouse development and two subdivisions were constructed. The church purchased two additional pieces of property in the 3300 block of Montegut Street and membership in the church grew to nearly four-hundred.  Reverend Edwards served as Pastor of Carver Desire for nearly thirty-four years, and was called home to glory on May 13, 1992. Following his demise, the church was once again without a spiritual leader.

On Wednesday, October 28, 1992, the congregation, by majority vote, elected Reverend James R. Willis Jr. to serve as Pastor of Carver-Desire Baptist Church. Reverend Willis was installed as Pastor of the church by the Seven Seals District Missionary Baptist Educational Association on Friday, December 11, 1992.

Under Pastor Willis’ leadership, the church instituted several new ministries, including Youth, Senior Citizen’s, Men’s and Women’s Ministries, all designed to promote and enhance the spiritual, cultural, and social development of the church and surrounding community. It also began construction of a new church facility.

After the destruction and devastation to our city and community brought on by Hurricane Katrina in 2005, the church began a community rebuilding program that included the repair of our present building, the purchase of four additional parcels of land and construction of two single family dwellings meant to spur the return and rebuilding by others in our neighborhood. These efforts are ongoing.

Future plans include, a Home Building and Ownership Program, a Day and Evening Care Facility, an after-school tutoring program; an adult Education and Jobs Training Program; and a Senior Citizen’s Independent Living Facility.

Carver Desire is ‘A Church That Cares About People’.